The Cove restaurant in San Antonio, Texas, says it is a Restaurant, Texas Beer Garden, Live Music Venue, Laundromat, Carwash and we are Dog-Friendly! It is all of that and more. One thing it isn’t is your typical restaurant. But is one you must visit if you are in San Antonio.

My wife arranged to spend our anniversary in San Antonio. Other than getting a place with Airbnb, we made no plans. Here is a little aside for those who understand the Texas Longhorn/Aggie rivalry. You would think by now living in a house with a husband and daughter who are both the University of Texas at Austin” graduates that she would not force me to endure a place adorned throughout with Texas A&M memorabilia. The Aggie architect who owns the condo was not shy with her pictures on the website. And the place is a shrine to Aggieland.

Anyway, we left our place of lodging and just started driving down 410. We did a Google search for restaurants in the area after we turned onto I-35. The Cove was one that showed up with excellent reviews.

The Cove: View from the front 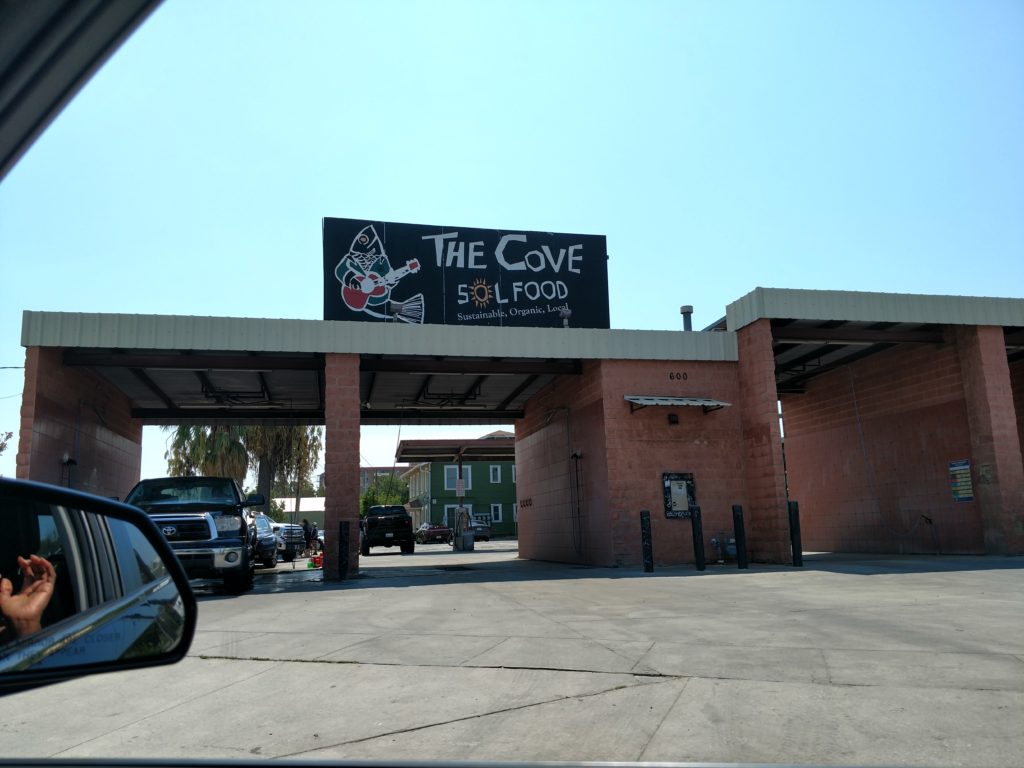 When we got to the place, it seemed rather strange from the front. I mean, both the car wash and the laundromat was prominent. We had to search for the entrance to the place which was one somewhat hidden door. I am sure the regulars enter from the side or back which presented a better view. The outside patio areas have strong misting fans that keep the outside areas several degrees below the hot ambient temperatures in the summer.

The staff was extremely friendly, helpful, and attentive. They were ready to explain all about their menu and concept. 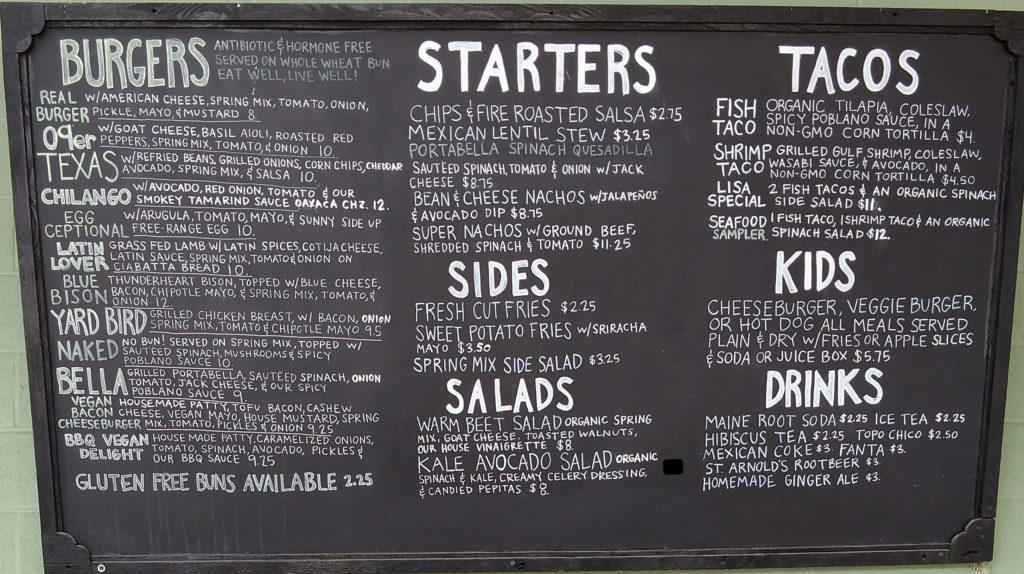 The menu is quite simple and easy to order from. It is all organic and made from sustainable resources. 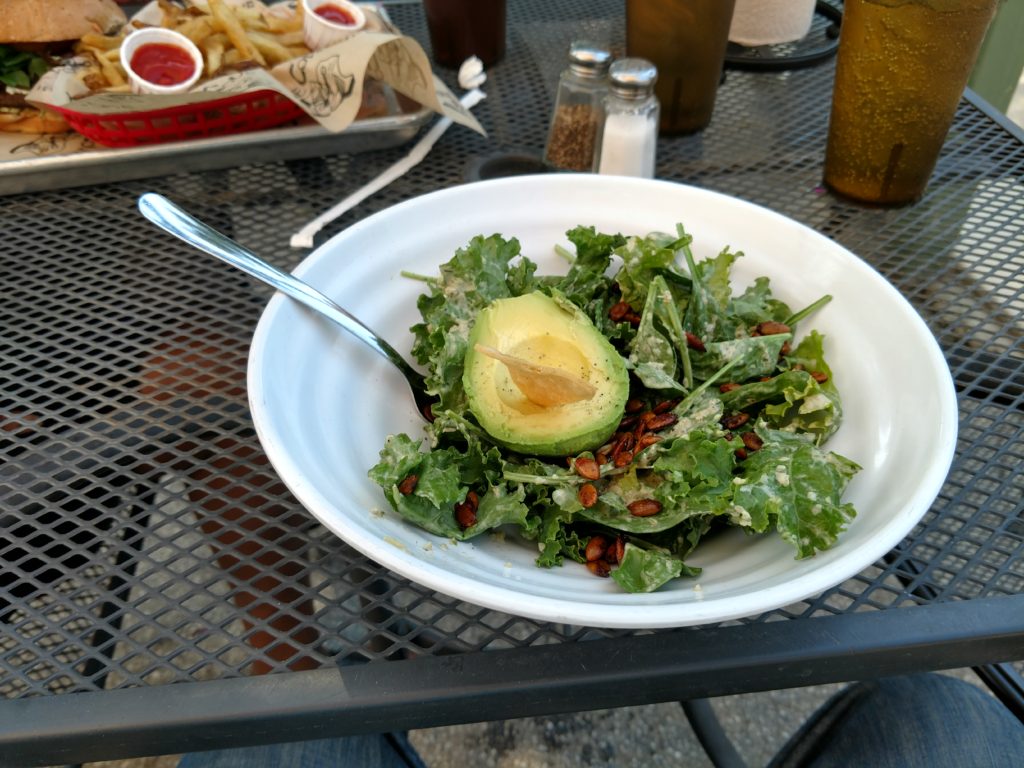 I had the Kale Avocado Salad. It included Spinach & Kale, Creamy Celery Dressing, & Candied Pepitas. I thought it was a bit expensive for the quantity given for $8.00. But I shouldn’t complain since Americans have been spoiled into huge portions which reflected in our ever increasing girth. So I applaud these guys for using false scarcity to help with our battle of the bulge. They should remember that overindulgence of greens without too much dressing is not a bad thing. 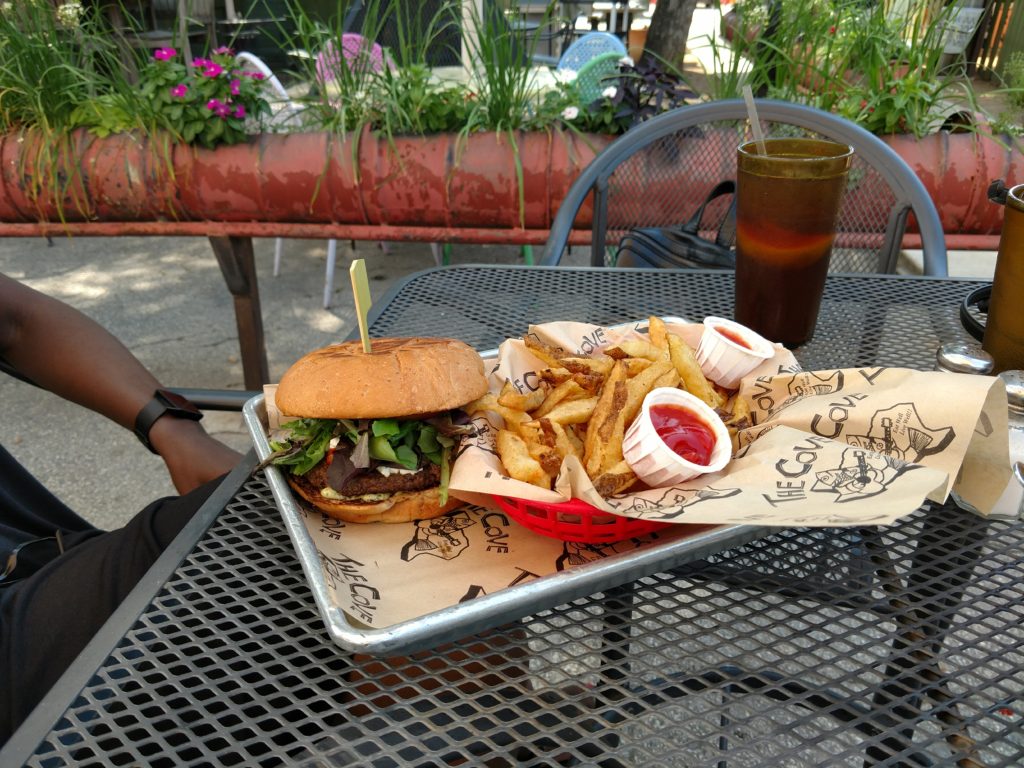 Linda had the 09er Burger. It included Goat Cheese, Basil, Aioli, Roasted Red Peppers, Spring Mix, Tomato, & Onion. The $10.00 price I thought was acceptable for these designer type organic burgers. The Fresh Cut Fries was a $2.25 side order and all drinks cost around $2.25.

The taste of the food was impeccable. And I did not leave the place feeling stuffed or heavy. 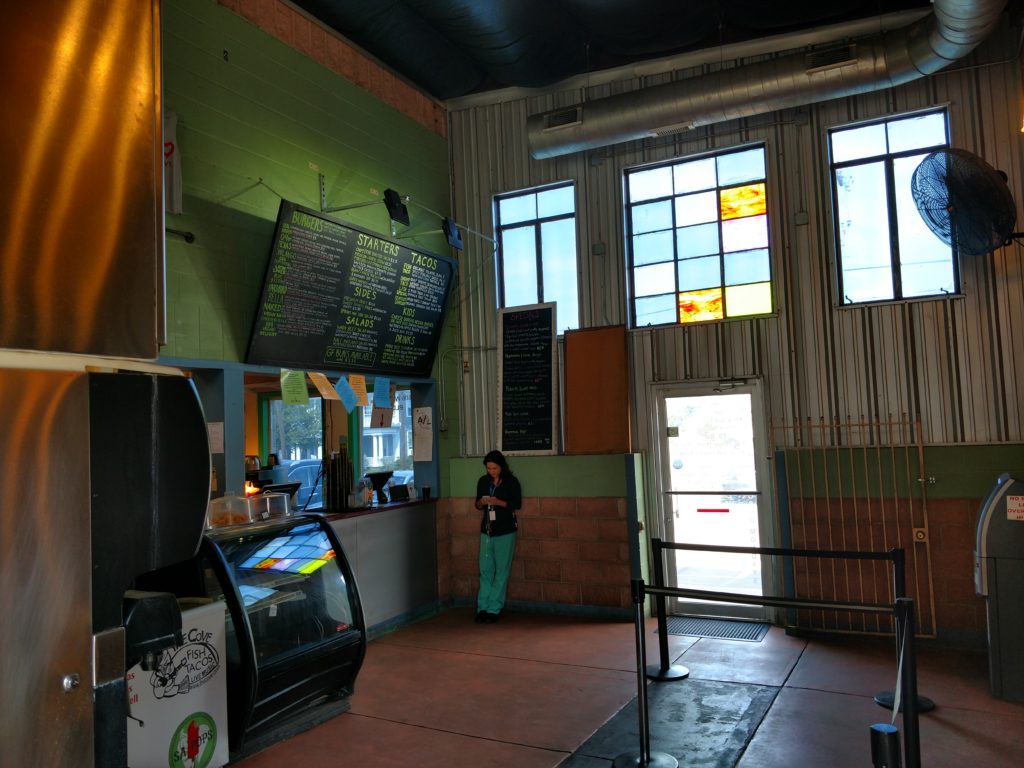 You place your order in the front of the building and then either eat on the patio or a playground area. Alternatively, you can eat in an air conditioned area that has live music.

Back side of restaurant 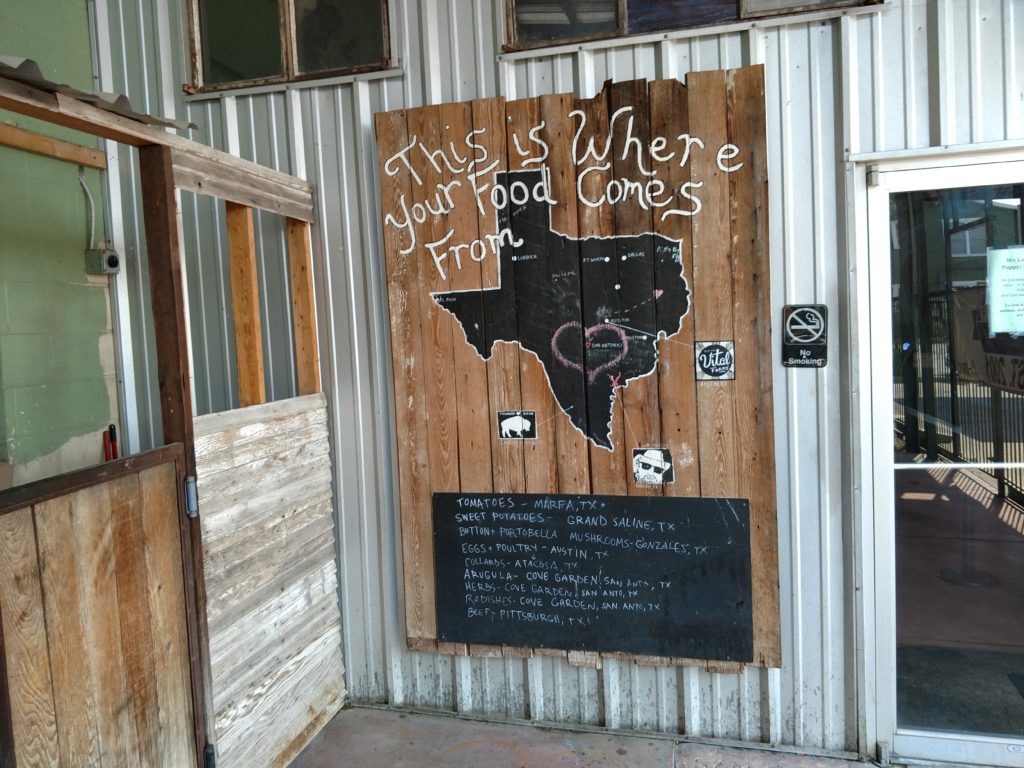 Patio in back of restaurant 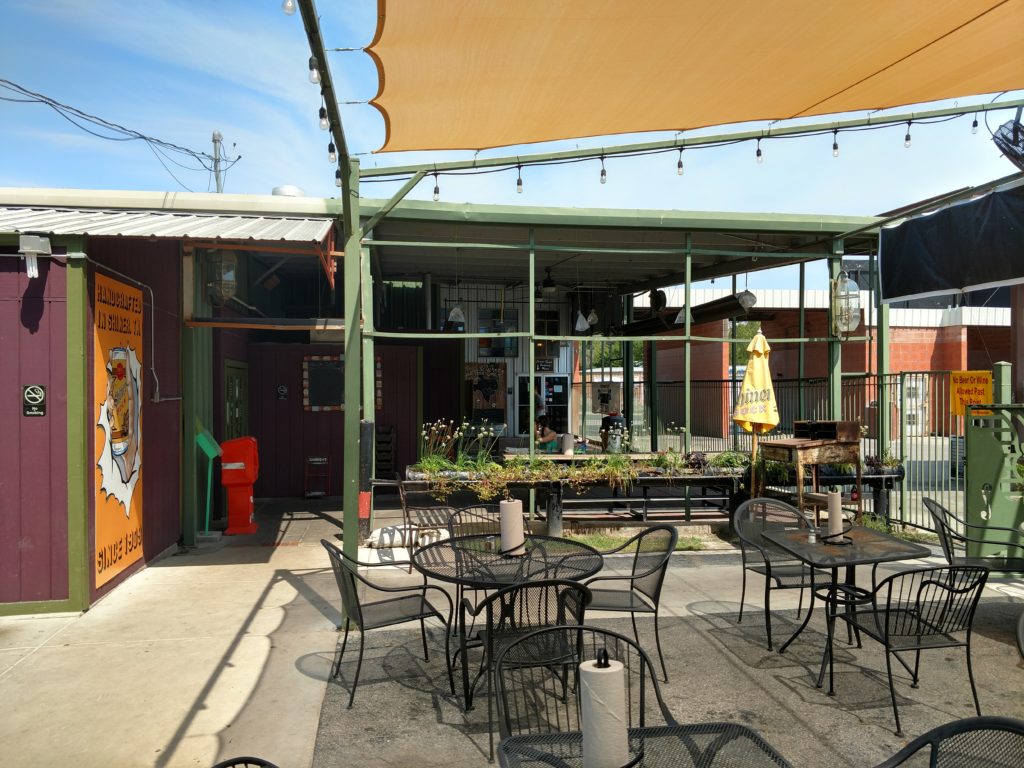 Another view of the backside of the restaurant 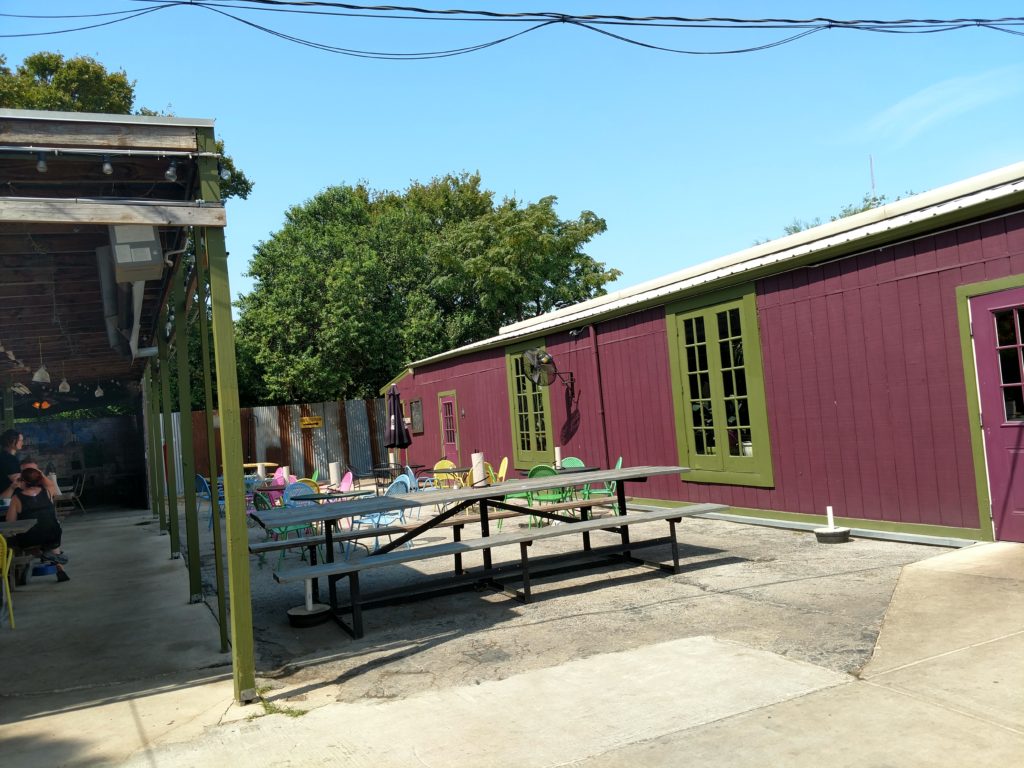 Playground area of the restaurant 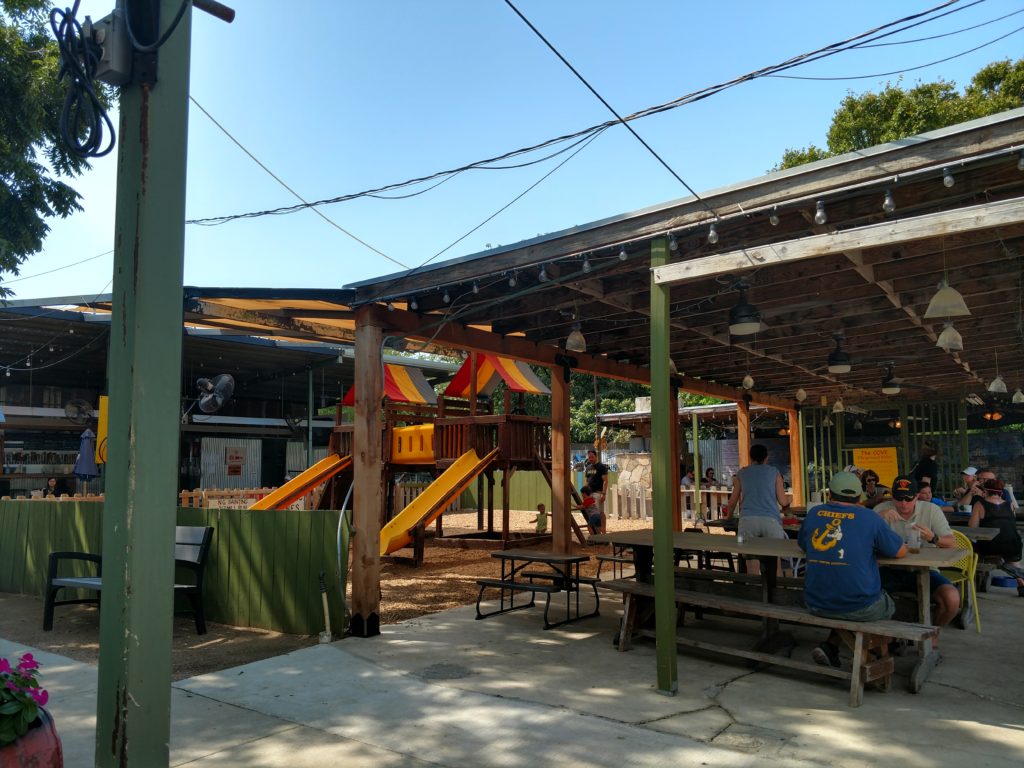 Menu and stuff on the wall 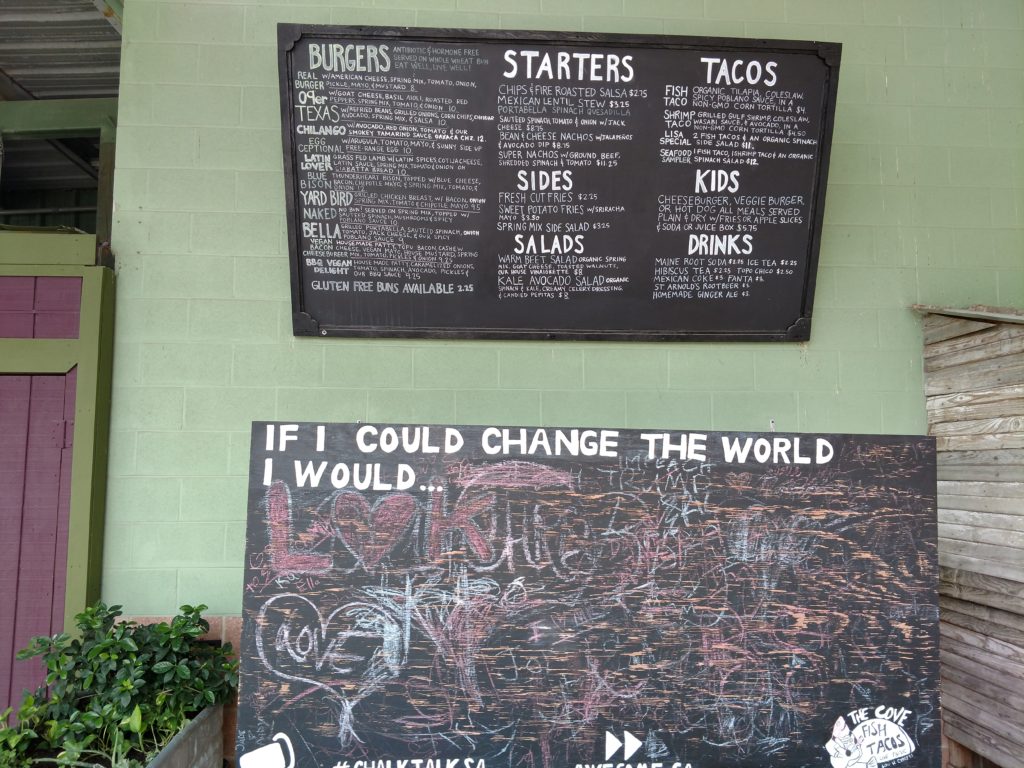 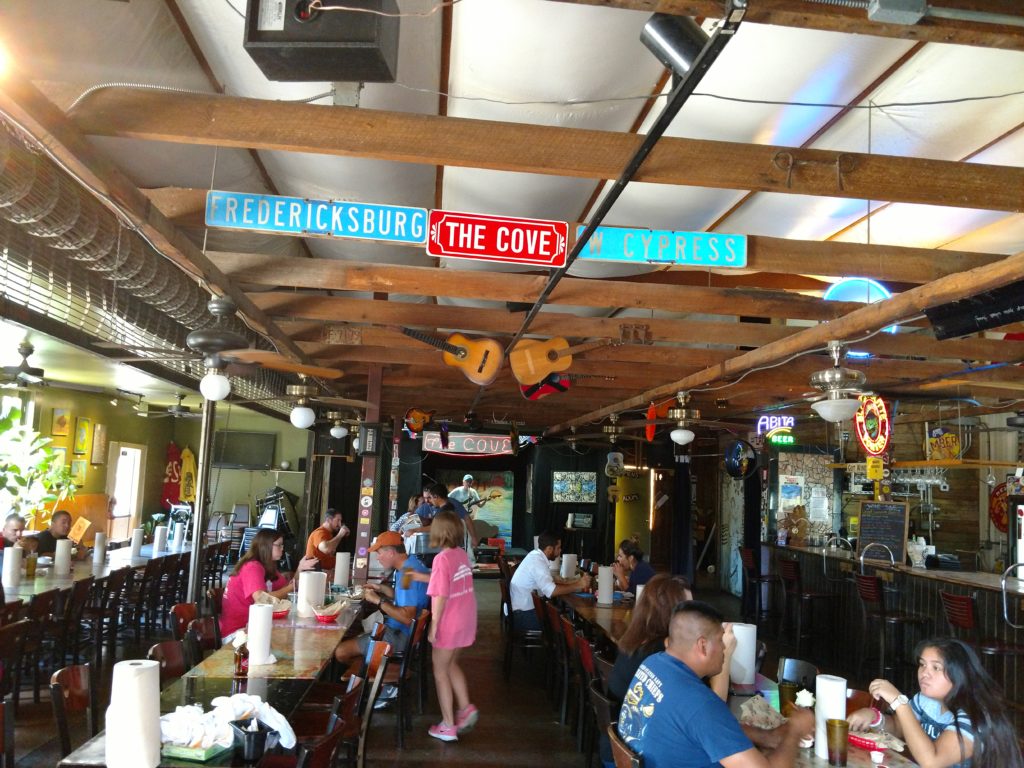 So what is my verdict? Get off the Riverwalk in San Antonio and visit other great eating venues that give a better value and experience.

I give The Cove in San Antonio, Texas a 4.75 out of 5 stars. I docked .25 for our initial difficulty in finding the place after being at the place. Many would have immediately driven off and missed a pleasant gastronomic experience.